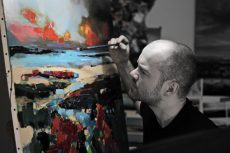 Scott Naismith graduated from Duncan of Jordanstone College of Art and Design in 2003. He’s based in Glasgow and combines being a professional artist with lecturing part time in art and design.

We love Scott’s vivid, optimistic interpretation of the landscape around him. There is a significant degree of abstraction in Scott’s landscapes which is an intentional response to the realities of particle physics we generally take for granted. While all things ultimately share the same building blocks and exist as solid, liquid or gas, Scott’s paintings question our perception of the world by intentionally blurring the lines between those states.

His paintings are much sought after both in the UK and further afield. He has recently exhibited in Minneapolis, Barcelona, Amsterdam, London, Chicago and New York. In 2014 he won the Arnold Clark Award at the Paisley Art Institute. You may have come across Scott on YouTube in one of his many videos discussing his alternative colour theory ‘the truth about the colour wheel’. Scott is also a published author; his book ‘Scottish Skies’ was published by Northern Arts Publications in December 2015.

Hear more from Scott in his own words: