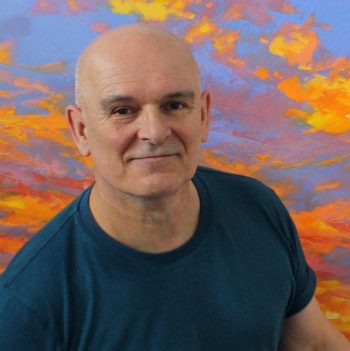 Apart from being inspired by art movements like the Impressionists and Expressionists, Nick says that his other main influencer was his early school maths teacher who, in his frustration, would often throw the wood-backed blackboard duster at him to the delight of his fellow classmates whilst calling him stupid! He is sure that was his eureka moment, deciding to forget the numbers and remember the colours. Luckily for him, having an accomplished artist grandmother and uncle made the transition easier, receiving plenty of encouragement from an early age.

Nick’s talent and determination led to Art College where, despite his tutors saying he should study Fine Art, he left in the early 70’s as a qualified graphic designer, a field he worked in for about 10 years before being drawn back to his passion for Fine Art. During the next few years he worked in the Middle East designing and executing large scale trompe l’oeil projects for royal palaces, including individual canvas commissions for smaller areas and individual rooms with specific decorative needs. A desire to want to focus on creating his own individual canvas work led him to setting up his own studio in London, from where he is now working full-time. His work aims to depict the fundamental elements that make our existence on our small planet possible. Striking sunlit skies and cool green forests are a particular focus of his current output. Nick has exhibited at numerous group & solo shows as well as art fairs worldwide. His work hangs in many collections, including those of celebrity and royalty.