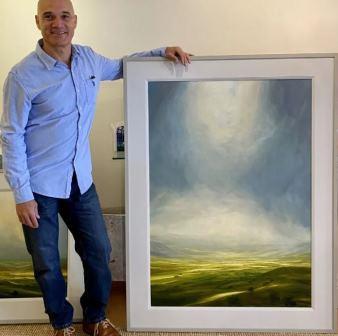 Harry was born in the Seychelles in 1965 to American and Creole parents. He enjoyed an idyllic childhood rich with adventure and the freedom that came with island life. However, in 1977 a Coup d’etat forced his family to flee their home. Harry’s family eventually settled in England in 1980 where they embraced a new country and culture far removed from his childhood. He now lives happily in Cheshire with his wife Catherine and their two young sons.

Harry undertook formal art training at Maidstone College of Art but considers himself self-taught as he was forced to leave the institution when he wouldn’t conform to their style and methods. A brave decision to go it alone led to a highly successful career as an illustrator and graphic designer. Harry launched his own company, ‘Tom Dick and Harry’, and worked with global brands including Dr.Martens, Coca Cola and BAE systems.

A passion for the beauty and drama of his adopted home is evident in Harry’s majestic paintings which capture landscapes that are in sharp contrast to the Seychelles. The constantly changing British skies are a key component of Harry’s work, resulting in breath-taking, expansive paintings. It’s no surprise that Harry’s beautiful work now hangs in private and corporate collections around the world.

Harry’s work is highly regarded by his peers in the art world and is regularly selected to feature in NEAC, ROI and the RBA annual exhibitions at the Mall Gallery in London. A fitting riposte to the inflexible demands of his art tutors all those years ago!