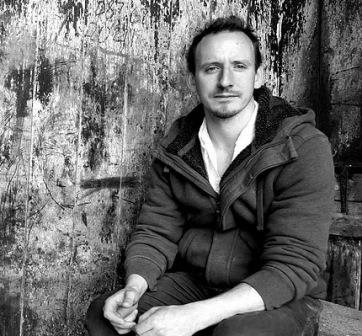 Greg Ramsden SWAc Studied at Sheffield University under the realist painter George Shaw who was shortlisted for the 2011 Turner prize. Greg is the youngest Academician in the South West Academy of Fine Art and now a director of the Academy.

“I’m inspired to paint by the light around my subjects; the stronger the sunlight the more I’m driven to capture its effects”.

Painting in a monochrome palette allows Greg to create an immediate impact using the visual language of light, memory and landscape. He paints in oil or acrylic, the paintings developing from drawings made staring into the sunlight. He takes the sketches and paints from these fresh memories in the studio which acts as a visual lab. Here he can distil the drawings, ideas, locations and condense time into a final painting.

Greg attributes his creativity to his dyslexia which he feels gives him the creative freedom to access a particular way of looking at the world.

Until recently Greg’s work has focused on beaches, pontoons and coastal scenery of Salcombe. We’re very pleased that he has chosen to focus a new collection on Dartmouth and the River Dart. We’ll be adding more paintings as they arrive from Greg’s studio. Sign up for our emails below to get advance notice of all of the new work from Greg.