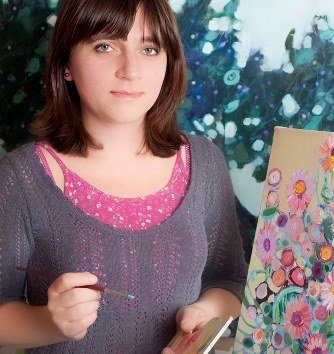 Born in Poland, Ania Pieniazek moved to the UK in 2005 and now lives in London. Over the past decade she has built a reputation for her bold, bright paintings. Each canvas finds joy and pleasure in everyday objects. Ania works mainly on canvas in oil or acrylic, she likes to experiment with colours and shapes trying to convey the pictures from her imagination. She draws influence from the work of Vincent van Gogh, Paul Gauguin, Gustav Klimt, Henri de Toulous-Latrec and Polish painters such as Zbyslaw Marek Maciejewski, Jerzy Duda-Gracz or Stanislaw Wyspianski. Her paintings typically capture simple scenes of fruit, flowers, lazy morning breakfast tables, patterns and perspectives (and a cat named George!).

Ania is passionate about painting; ‘Creating art is a joy of my life. It is the most satisfying and fulfilling activity I can really imagine. If I were to be devoid from that pleasure, I would probably slide into a chasm of depression. I always have been creative, as far as I remember. I could never stop drawing or doodling’.

Ania has exhibited continuously since 2010 in solo and mixed shows in galleries in an around London. We’re thrilled to now be showing new work by Ania in Devon for the first time.